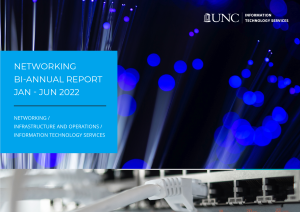 The first line of the newest ITS Networking biannual report, chronicling the work done in the first half of 2022, sums it up: “projects, projects and more projects.” Ryan Turner, interim Director of Networking, said of the last six months, “we have been extremely busy working on new initiatives, life cycle and capital projects.”

Over the past six months, ITS Networking:

Supply chain issues are still a primary obstacle for completing projects, but “we are about to see improvements,” Turner said. “We are beginning to receive large shipments of gear that should allow us to move back into a normal life cycle schedule in the next six months.”

Projects in the works include:

For all the project details and campus networking metrics, read the full ITS Networking biannual report.