During the 2016-2017 fiscal year, ITS User Support & Engagement provided substantial support to the migration to Office 365, continued to grow use of the Adobe Creative Cloud and Lynda.com services, created a new service catalog and gained Dell repair certification.

Please keep reading for details about these accomplishments and many more US&E highlights. As an integral part of the Office 365 project team, the ITS Service Desk and the Office 365 Field Team provided support to all affiliated faculty and staff email accounts that were migrated from the on-premise Exchange system to Office 365. The project ran from August 2016 to July 2017 with active migrations and support occurring in seven of those 11 months.

The ITS Service Desk resolved more than 2,400 tickets directly related to the migrations. The Service Desk’s Tier 2 team, led by Lyndon Joyce, provided much of the support to the migrating users and also worked with Microsoft directly on issues that needed escalation. As part of the preparations for the migration of campus, the ITS Service Desk also documented new FAQs, help articles and self-paced training resources.The  Office 365 Field Team provided personal, desk-side, hands-on support each go-live day for migrating departments.

More than 11,000 students, faculty and staff activated licenses for Adobe Creative Cloud since ITS launched the service in September 2016. As part of the agreement with Adobe, any faculty or staff member at UNC-Chapel Hill can gain access to this suite of applications for $20 per year for departmental use; students and 2,000 instructional faculty and staff members have access to the software at no cost. As part of efforts to continually improve the service, ITS changed the user information console to automate the process of provisioning and deprovisioning user accounts.

ITS User Support & Engagement groups collaborated to produce the Tar Heel Tech Fair in September 2016. The information fair drew more than 1,000 attendees and participants from several ITS departments, multiple University departments and external vendors. Because it was a great success, ITS will hold the outreach event annually to promote digital literacy and services.

ITS Dispatch Services and On Site Support combined into ITS Managed Desktop Services (MDS) and shifted focus from providing mostly response-based IT support to proactively managing customers’ desktop computing devices. The MDS group provides IT support services to departments, faculty and staff across campus.

In the 2016-2017 fiscal year, ITS User Support & Engagement finished establishing service-level agreements (SLAs) for all groups within ITS and operating-level agreements (OLAs), which are needed to support the SLAs. In March 2017, the ITS Computer Repair Center (CRC) gained certification to repair Dell computers, marking the third such agreement that the center has with a computer manufacturer. Previously, the center handled repairs only for Apple and Lenovo Think branded desktops, laptops and monitors. CRC pursued Dell certification after its customer, Orange County Schools, chose Dell as its primary supplier of computers.

In September 2016, ITS User Support & Engagement began the process of selecting a new service-management tool for campus. A new system will enable users to submit all service requests through one tool. 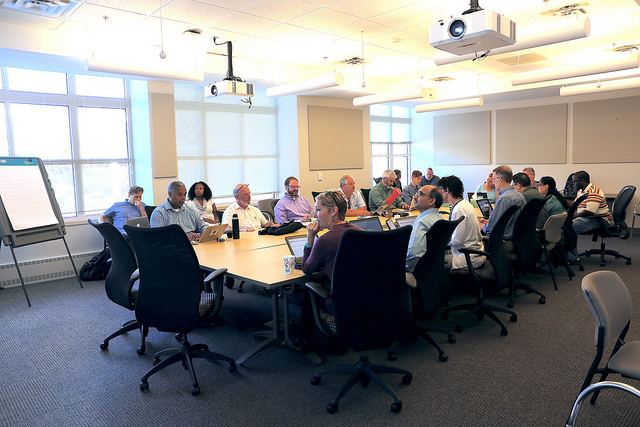 The Change Approval Board (CAB) has gone through a few revisions since its creation in April 2016. As part of the continual service improvement process of this highly functional group within ITS, CAB has implemented an incidents communications checklist, a change calendar and a yearly review. CAB, which meets weekly, also added the IT group of the University’s Division of Finance and Administration as a permanent contributor. In addition, CAB decided it will add more external contributors from the campus in the 2017-2018 fiscal year.

“Prior to the current CAB and the documentation of an actual change management process,there was inconsistency across ITS in terms of what a “change” was, when a notice should be sent, what should be in a notice, and who should approve a change,” said Jim Gogan, Assistant Vice Chancellor of Communication Technologies. “And as confusing as that was for ITS, it was worse for our customer base, who had given up reading change notices. Now, the process is better defined, better understood, and actually means something.”

The ITS Service Desk and ITS Communications collaborated to create 17 micro videos to help promote the Office 365 migration project via social media. The ITS Service Desk relocated its south campus location to the SASB-North building in February 2017. This location provides walk-in support to much of the undergraduate population and departments that are located south of the main campus location.

Lenovo was selected to supply desktop and laptop computers to UNC-Chapel Hill through the Carolina Computing Initiative (CCI) under a new four-year agreement with Lenovo. The contract, effective January 1, 2017, applies to computers and support services purchased by faculty and staff through CCI from 2017 through 2021.

In Fall 2016, Software Acquisition and Campus Infrastructure Services finished a project to establish a formalized Desktop Management Service for the University.

Desktop management is a way for IT administrators to push applications and software updates to computers without physically being at the computers that need those updates. SCCM and Casper are both applications that ITS and departments on campus use to implement those changes.

The effort began in January 2016 with the following objectives:

After coordinating 30 Maker Cart events in the residence halls to promote the Maker Spaces on campus, in addition to 56 mobile support sites and participating in the ITS Tech Fair in the Pit, ResNET staff combined the most successful aspects of all these events. ResNET now holds two Tech Fairs in the residence halls each week to promote IT initiatives, provide 3D-printing displays and troubleshoot client issues. Currently, ResNET staff are focusing on educating students about phishing, Duo, Adobe Creative Cloud, Lynda.com, SkillfUL learning workshops, Office 365 and the BeAM initiative, in addition to letting clients know about the Service Desk and how they can get IT help in the halls.

ResNET worked with HBO to hold an Escape Room event in the Student Union in February 2017. Students solved puzzles to make their way through Game of Thrones, Veep and Silicon Valley-themed escape rooms before getting a photo opportunity in the Iron Throne. More than 700 students participated in the event.