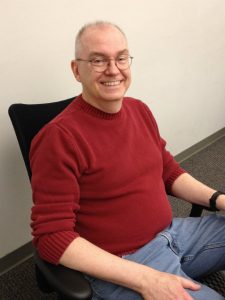 Jim Gogan, who oversees networking as well as operations and engineering for Information Technology Services, finds it kind of cool and unexpected that after 38 years at the University, he’s still getting more things to do instead of fewer. Now he definitely won’t retire any time soon, he said. Some 40-plus years is very likely.

As interim chief of the division, Gogan said his goals include improving communication internally and externally, warding off any change fatigue among his team and campus technology users, continuing the good progress on his group’s many projects, and developing plans for future projects.

Improving communication is a top priority

“It’s sort of ironic that the group I head is called Communication Technologies because I think the most important thing that we do is to communicate about the technologies. That’s just something that I’ve always emphasized and I’m continuing to emphasize with the bigger group now,” he said.

“I really want people to let us know when they see things that aren’t normal,” Gogan said. Use the ITS Listserv to communicate, he advised. “If you’re seeing something that doesn’t look normal, odds are you‘re not the only one who’s seeing it and trying to figure it out.”

Town-gown relationships will be a focus

Gogan also is looking at opening up communication lines beyond the campus. “We’re getting involved in more and more discussions with the town of Chapel Hill and the town of Carrboro in terms of what their connectivity requirements are and can we help them, and in terms of can they help us with some of our connectivity requirements,” he said. “In the town beyond just the campus boundaries, there are many things we can work on together. We’ve been doing that with the Chapel Hill-Carrboro City Schools for a number of years now. Opening that up to the other towns as well makes a lot of sense.”

One such situation is the Carolina Center for Educational Excellence, a program run out of the UNC-Chapel Hill School of Education that needs connectivity back to campus. The program operates in a wing that the University built as part of Smith Middle School.

“If we need to put campus fiber to that location,” he said, “is there a way that we can use campus fiber for the benefit of the Chapel Hill-Carrboro City school that happens to be located at the same place?” Now “as the Internet becomes the only way of doing things,” he said, there are many instances in which the University and the towns and schools have common interests and could work together. There are “so many areas where the University may find itself in town space, or the town may find itself co-habitating with the University,” he said.

As much as possible he and his staff will look for opportunities that benefit both groups.

“I think the whole idea of town-gown relationships is just a really cool idea,” Gogan said.

Change fatigue is a concern

Another of Gogan’s goals is to ward off change fatigue among his staff and the user community, particularly with the Voice-over-Internet Protocol (VoIP) project. In that project, Communication Technologies is replacing the old Centrex telephone lines hosted by AT&T with Verizon’s VoIP system.

“We’re sort of like those cartoons where somebody’s running across the bridge while the bridge is collapsing behind them. We’re trying to get all this done before AT&T pulls the plug on the whole Centrex system,” he said.

For nearly five years, an ITS team has done nothing but change, change management and change expectations for the VoIP project, which is scheduled to finish in August.

“It’s been a significant amount of work for a whole bunch of people. One of the things I always worry about and try to watch for signs of and try to head off is change fatigue,” Gogan said. “You get to the point where you’re doing nothing but changing. Eventually you get fatigued, you get wiped out. You need a steady, staid period for some period of time.”

To avoid burnout for ITS people and users, the University won’t be in any rush to replace the Verizon system. Likewise, after migrations with other projects, Gogan will ensure that “there’s a nice quiescent period” for ITS people and the user community.

“The user community has a lot going on in their own lives,” he said. “They don’t need significant changes being imposed consistently from outside. “

Certainly, Gogan said, “one of the questions that you always have to look at when you have a service provider is are there better alternatives.” Does another service provider provide better pricing, options and service?

Comm Tech will “keep on keeping on” with other projects

“There are always shining new baubles out there,” he said. “But change is a lot of work and sometimes pretty isn’t enough of a reason.”

In other goals, Gogan will “keep on keeping on” with other ongoing Communication Technologies projects, such creating pervasive Wi-Fi coverage within all remaining campus buildings.

Gogan also is starting to prepare for upcoming projects. One particularly challenging project, he said, will be bringing communications infrastructure to Odum Village. In 2017, the half-century-old buildings will no longer be used for housing. Gogan is beginning to review cost estimates and funding sources for providing communication technologies to what will become space for University departments.